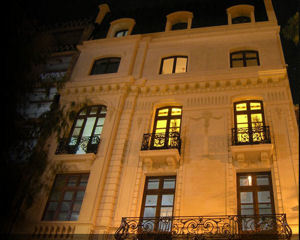 A LUXURIOUS MANSION IN BUENOS AIRES' RECOLETA: Poised to open in November 2009, Algodon Mansion is in the heart of the Recoleta, Buenos Aries' chic embassy and luxury hotel district. Once a private residence, the Mansion was built in 1912 in a French Classical design. Ten spacious suites--some exceeding 1,200 square feet--epitomize old-world Argentina but provide state-of-the-art luxuries, including 24-hour butler and concierge service, a fine-dining restaurant serving Argentine and French-fusion cuisines, a wine cellar, library bar, a covered outside patio and fireplace, and a rooftop pool, sauna, spa and bar. A dramatic four-story waterfall stretches from the roof to the ground floor lobby and can be viewed from virtually every suite. Tip: Sampling the wine is a must. The cellar features wines from the Mansion's sister project, Algodon Wine Estates, in Mendoza, "the Napa Valley of Argentina." View Hotel website: Algodon Mansion

A GRAND HAVELI INSPIRED BY INDIA'S MOGHUL ERA: Styled after the grand architecture of the Moghul era, Amanbagh pays homage to Rajasthan's golden age through its elegant interpretation of a grand haveli, or nobleman's palace. It sprawls over grounds once used by the Maharajah of Alwar as mobile hunting camps in his search for the elusive tigers known to roam the nearby hills. Lavish interiors incorporate floors of softly-hued pink marble or makrana, and domed cupolas and inner courtyards of pale smooth sandstone. Amanbagh's 24 Haveli Suites and 16 Pool Pavilions are set in a lush oasis of verdant foliage, and there is a pool, heated in the cooler months, along with a spa where yoga and Ayurvedic treatments are on the menu. Tip: Amanbagh's organic garden provides most of the resort's herbs and vegetables, so salads are deliciously fresh. Guests should request a tour of the garden with one of Amanbagh's chefs.
View Hotel Profile: Amanbagh

A FAIRYTALE CASTLE IN THE WEST OF IRELAND: Located on the magnificent west coast of Ireland in County Mayo, Ashford Castle is set on 350 acres of beautiful gardens and secluded woodlands. Once the country estate of the Guinness family, the sprawling castle dates back to 1228 and was transformed into a hotel in 1939. The 83 elegantly appointed guest rooms and suites, some tucked into turrets and others with canopy beds and fireplaces, offer spectacular views of gardens, the River Cong or Lough Corrib. Country sports abound and there is even Ireland's first school of falconry. Tip: The Ashford 70 package covers three nights for the price of two with breakfast for two each morning, one dinner for two and a bottle of champagne for guests celebrating a 70th birthday, combined ages that add up to 70 or a 70th anniversary. View Hotel Profile: Ashford Castle

A GRAND PALACE ON THE SHORES OF LAKE GENEVA: Located on 10 acres of parkland on the shores of Lake Geneva in Lausanne, the Beau-Rivage Palace is considered by many to be the finest hotel in Switzerland. The Beau-Rivage wing opened in 1861 and was joined by the Palace wing in 1908. Today this grand palace hotel has 169 individually decorated guest rooms, including 33 suites and 21 deluxe rooms, along with the sleek Cinq Mondes Spa, two bars and three restaurants. Tip: Guests should book a table at the new restaurant, Anne-Sophie Pic at the Beau-Rivage Palace, when they make their room reservations. Chef Pic is the only female chef in France with three Michelin stars, so this is a hot reservation. .
View Hotel website: Beau-Rivage Palace

THE FIRST PALACE HOTEL TO OPEN IN PARIS SINCE 1928: When Fouquet's Barrière opened in 2006, it was the first palace-style hotel to open in Paris in almost 80 years (the George V was the last in 1928). A unique combination of modern-chic and fin-de-siécle grandeur, Fouquet's was designed by architect Edouard François in traditional Paris Haussmann style, with Jacques Garcia overseeing the interior design. Decadent materials of velvet, mahogany, marble, silk and embroidered leather fuse with high-tech digital equipment and personal butlers are assigned to each guest upon arrival. Tip: A "Paris C'est L'Amour" package includes a one-hour photo shoot with a black and white photographer to recreate the famous Robert Doisneau photo called Le Baiser (The Kiss), circa 1950. Guests are even treated to a makeup session. View Hotel Profile: Fouquet's Barriere

A NOBLEMAN'S HOME FOR AN EXQUISITE ROMAN HOLIDAY: Located at the top of the Spanish Steps, Il Palazzetto and the International Wine Academy of Roma were created by the owner of the nearby Hotel Hassler and share one of the most spectacular hideaways in Rome...the same area where the spectacular banquets of Lucullus took place. Built in the 16th century, Il Palazzetto was for many years the retreat of a noble Roman family. An architectural jewel of rare beauty and historical value, Il Palazzetto has only four guest rooms and includes a recently refurbished restaurant and wine bar, as well as two terraces that serve lunch, dinner and evening cocktails. Tip: Rates drop to €250 in January and February when tourists are more scarce (compared to €360 in May, June and July).
View Hotel website: Il Palazzetto

A COLONIAL MANOR HOUSE HIGH IN THE ANDES MOUNTAINS OF PERU: La Casona, Cusco's first boutique hotel, reflects the city's mélange of cultures and traditions. This striking 16th-century mansion--perhaps the first Spanish construction in Cusco--was once occupied by the first Conquistadores and their mestizo descendants. A national monument, it is now an exclusive hotel located in the beautiful Plaza Las Nazarenas, at the heart of the historical Andean city of Cusco. INKATERRA has meticulously created an 11-suite manor house, maintaining the original design and architecture around two open terraces. Colonial furnishings and original murals blend with lavish contemporary comforts in suites with open fireplaces, heated floors and extra large bathtubs. Tip: A three-day/two-night Vintage Cusco package includes transfers from the airport or train station and visits to key Incan sites at an easygoing to moderate pace that helps guests adjust to the high altitude. Rates start at US$996 per person with breakfast and dinner. View Hotel Profile: Inkaterra La Casona