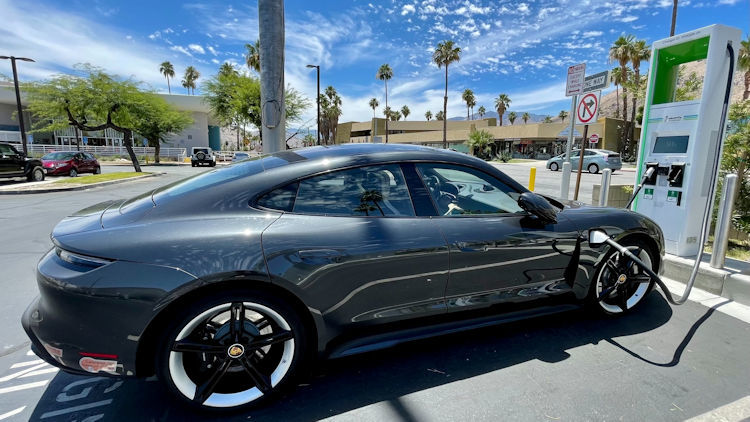 The great American road trip is about to get electrified. At the end of 2021, the popular car rental company Hertz purchased 100,000 Teslas. This is one of the strongest signals to the travel industry that electric cars are going mainstream and an indication of the broader societal shift towards electric cars in the U.S.

Electric vehicle (“EV”) volumes are soaring in the U.S – with registrations up 60% in the first quarter of the year – despite new car registrations down 18% overall.

With this newfound enthusiasm for battery-powered vehicles, travel insurance comparison site InsureMyTrip examined relevant travel data for key road trip categories to the most popular road trip routes in the U.S to see which ones are best (and worst) equipped for electric vehicles*.

Leading the (literal) charge, the Pacific Coast Highway is named the best road trip route for electric vehicles overall, scoring 6.48 of a possible 10 points. It received high scores in four of the six categories, including the number of charge points per stop (10), quality of attractions and experiences (8.97), quality of restaurants (7.63) and quality of national parks (7.52).

Named one of the best road trips in the US, Pacific Coast Highway runs for 655 miles along the Californian coastline. As the number of electric vehicles on the roads grow and with the median range for EV models reaching 234 miles, states are responsible for much of their own governing and this includes charging infrastructure.

Luckily, for those travelling along this route, the Californian state government has installed almost 5500 electric charges along it, with 93% of them a level 2 charge.

In addition, California recently announced an aggressive plan to mandate a steady increase in the sale of electric and zero-emission vehicles, the first step in enacting a first-in-the-nation goal of banning new gasoline-powered cars by 2035.

The 444-mile route passes through Tennessee and Mississippi allowing you to take in the beautiful sights in the rural southeast. However, with fears of running out of charge during the journey, this route has over 360 chargers and almost 80% are ‘fast charge’, minimizing the risk of running low on battery.

This is set to change as Mississippi is set to receive $50 million from the Infrastructure Bill to pay for charging stations and establishing corridors across the state for EV drivers.

Completing the top three road trip routes for electric vehicles is the Appalachian Trail (5.42) due to its quality of restaurants (9.21), quality of national parks (8.48) and quality of attractions and experiences (7.95).

However, it’s the EV infrastructure that lets this 2200 mile long journey down. Despite having over 1000 chargers available, 91% of them are based in New York, leaving less than 10% for the remaining miles and only four percent are level 3 charging.

Not all road trips are prepared for electric vehicles. The Border to Border (2.22) route is named the least suitable for EV’s.

Poor quality of attractions and experiences (0), number of charge points per stop (0.85), percentage of free chargers (1.16) and number of level three charge points (1.27) make this route the least desirable when using an electric vehicle.