Vacation Like Royalty at Prince Charles' Estate in Wales 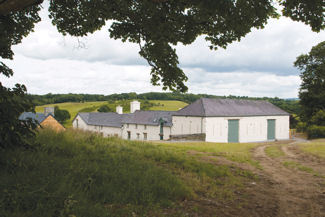 Llwynywermod, a former 18th century coach house and farm bought by the Duchy of Cornwall estate, has been renovated to become the first Welsh home for the Prince of Wales and the Duchess of Cornwall. While the royal couple has their quarters in the old coach house; visitors are able to book the neighboring two 18th century style cottages when the royals aren't at home.

The properties feature Welsh slate and stone, and the interiors mix period and contemporary furniture including many Welsh pieces and local fabrics. Prince Charles said: "It is above all a tribute to Welsh craftsmanship, which is of a very high order, and that unique rural and industrial craft inheritance that has formed so many equally unique Welsh characters that I have been so proud and privileged to have known during the past 50 years."

Guests staying at Llwynywermod will be enjoying the same surrounding landscapes and tranquility which attracted its royal owners. Carmarthenshire is known for its castles, beautiful gardens, and towns and villages like Laugharne, where visitors can tour the Dylan Thomas Boathouse.

Both of the cottages feature stone floors, large fireplaces, oak-shuttered windows and high quality furnishings. They also include modern comforts such as flat-screen TV, DVD player, dishwasher and washing machine. North Range Cottage sleeps up to six people, and West Range Cottage sleeps up to four, with prices starting at £600 per week. The rental includes electricity and heating, towels and linen, toiletries, logs for the fire and a welcome pack.

Each cottage has a fully-equipped kitchen with a timber work surface. Heat and hot water is supplied from a woodchip boiler, and sustainable natural products have been used in the construction, including sheep's wool insulation and hemp plaster.

• Wales is a country about two-thirds the size of Massachusetts: 200 miles long and 70 miles across at its widest point.
• Wales and England and Scotland are the 3 distinct countries that make up the island of Britain.
• Wales is "a peninsula on the western flank of England, facing Ireland," as writer Jan Morris aptly describes its location. Cardiff, the capital of Wales, is just 2 hours by BritRail from London.
• The people of Wales are called Welsh and many still speak the ancient Welsh language (as well as English).
• Wales will host golf's Ryder Cup competition in 2010, the sporting world's third-most watched event. The Ryder Cup will be played at the Celtic Manor Resort near Newport, Wales.

For more information on planning vacations in Wales, visit www.TravelWales.org.