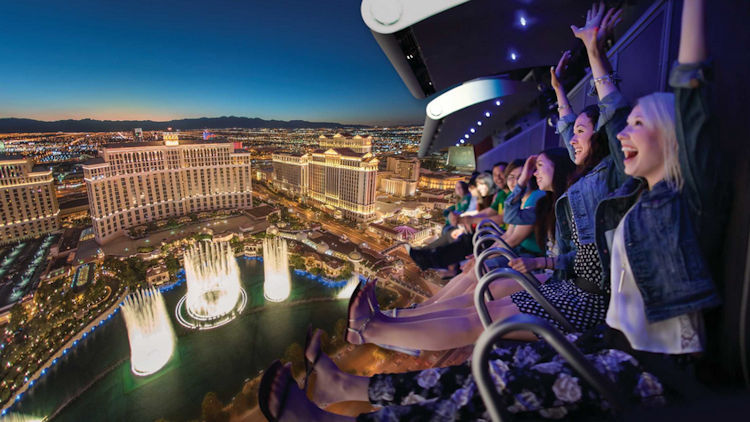 FlyOver in Las Vegas, the new immersive flight ride from leading hospitality company Pursuit, will officially take off on the Las Vegas Strip Sept. 1. Tickets are now on sale for the attraction at flyoverlasvegas.com, which will take guests on a multi-sensory journey as they soar over 22 of the American West’s most spectacular destinations, from the plunging river valleys of the Grand Canyon to the volcanic peaks of Oregon’s Cascade Volcanic Arc.

The flight ride’s film, “The Real Wild West,” will be shown in stunning 8K high definition on a 52.5-foot spherical screen. Fliers will glide through some of the most picturesque locations in the United States, including landmarks in Nevada, Oregon, Washington, Montana, California, Arizona, Utah, Colorado, Wyoming and New Mexico.

The attraction uses a state-of-the-art moving platform with six degrees of motion that enables guests to feel every sweeping movement of the journey. Special effects including wind, mist and location-specific scents heighten the immersive flight ride as guests hang suspended with their feet dangling above the country’s most stunning natural wonders.

“We are thrilled to open Pursuit’s first FlyOver in the United States next month,” said Lisa Adams, Vice President of FlyOver Attractions. “The immersive nature of this experience is something The Strip has never seen before; you’ll be able to experience many of the world’s most incredible locales without leaving Las Vegas Boulevard.”

At the start of the ride, guests will be entertained by a cinematic boarding and pre-show experience created by Moment Factory. The panoramic, six-minute pre-show is projected across 360° wraparound walls and a central hanging medallion as it chronicles the booms and busts of the American West, from the Cambrian Explosion through to Gold Rush ghost towns and Silicon Valley startups, setting the stage for the adventure ahead.

After the pre-show and upon boarding, guests will reach new heights during the main event as they are immersed in the American West from a completely new vantage point. Some of the stunning stops along the way will include:

Located next to the Hard Rock Cafe on Las Vegas Boulevard, FlyOver in Las Vegas will open with two flight ride experiences and a full-service bar serving craft cocktails and bites. The experience will be open daily to guests of all ages, with tickets starting at $24 for children (ages 12 and under) and $34 for adults. Children must be at least 40 inches tall in order to ride.

For more information on FlyOver in Las Vegas, please visitflyoverlasvegas.com.