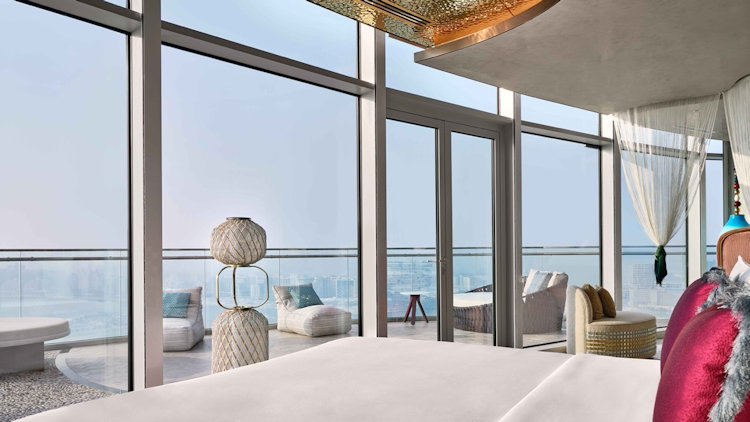 BLINK Design Group unveils the jewel in the crown of the new W Dubai - Mina Seyahi in the form of its spectacular 30th floor EWOW Suite, opened to guests in October 2022.

BLINK’s interior designs for the showpiece hotel are a stunning modern bohemian vision inspired by traditional Dhow boats, the romance of travel and the ancient Arabic storytelling tradition of Al-Halqa.

The UAE’s latest W Hotel, located in the heart of Al Mina Al Seyahi, the legendary ‘Port of Travellers’ district of Jumeirah Beach, is home to the glittering Dubai International Marine Club and its 300-berth marina. The hotel ranges over 31 floors, with 318 guest rooms and 27 opulent suites; a spectacular marina-front lobby, a pool area and lavish spa, four state-of-the-art meeting rooms and a selection of the most cutting-edge dining concepts in Dubai.

BLINK founder and creative force Clint Nagata said the hotel’s EWOW Suite was a true journey into ‘wow’ indeed, and a space where his team had been given free rein to unleash their creative genius.

“The Al-Halqa tradition of poetry battles in the souks comes to life most of all in the EWOW Suite,” Mr Nagata said. “It has been conceived as a place where storytelling abounds, a space for bragging about travel tales, adventures, one-upmanship. A sense of travellers connecting, sharing tales, traditions and treasures, a melting pot of ideas, intrigue and excitement.”

The EWOW Suite luxuriates over 160sqm, comprising a large corner of the 30th floor, with breathtaking views over the bay and marina, where Dubai’s movers and shakers come out to play.

“Our tagline for the suite was ‘brag about it, write about it, battle it out’. It turns out rap battles are nothing new. They have been going on in the souks of Arabia since time immemorial. In tradition, the winner of the poetry battle would have their words written in golden ink and hung at the gates of Mecca.”

This theme of golden words and storytelling is woven into the literal fabric and spirit of the suite. “We have elements of the souk from the foyer space, with coloured lights, golden fixtures, elements of calligraphy, even a lighting feature that feels like flowing golden ink,” Mr Nagata said.

“The main living area features a bar that also doubles as a DJ station, with mosaics inspiring the textile treatments. The master bathroom also features a mosaic. The bathroom is conceived as an entertaining space, where you can be having a cocktail and chatting to your friends while you do your makeup and get ready for dinner or the club.” 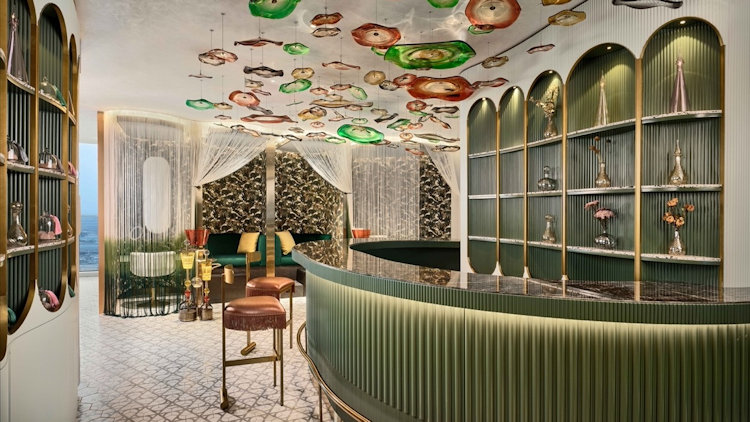 The centrepiece of the spa is Bar-B, a manicure counter which doubles as a working bar, where guests can enjoy a bespoke cocktail while their nails are pampered.

Mr Nagata said the entire project had proved an eye-opener in terms of what was possible within the vivid brand universe of W Hotels.

“The more we researched the history of Dubai, the generations of traders and storytellers coming together to build this shimmering city by the sea, the more excited we became. Of course, the ‘Port of Travellers’ was the overarching inspiration, so we set out from the ground up to imbue this hotel with the soul of storytelling and the spirit of the souk, a place for people to meet and share the stories of their travels, a place for modern day traders to meet, wheel and deal.”

W Dubai - Mina Sehayi is currently in a soft-launch period, ahead of the grand opening scheduled for October.