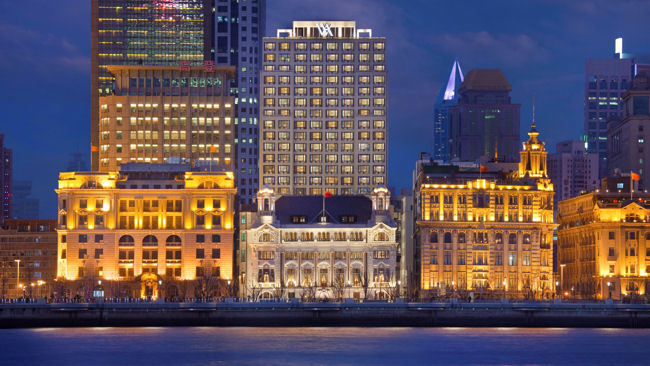 The 2008 Olympics and the 2010 World Expo were invitations to the world, and my husband and I decide to accept, joining a growing number of Westerners. But where to begin? How to navigate with no knowledge of the language, written or spoken? We decide to fly to Shanghai known for its cosmopolitan flare and put ourselves in the hands of the newly opened Waldorf Astoria Shanghai on the Bund.

Although an ultra-modern high-speed train, the Maglev whisks travelers into the city center, we opt for a hotel pick-up, the comfort of a private car, and an English-speaking greeter. Our U.S. airline fails to produce our bags, so the Waldorf staff jumps into action. They make the calls and arrange for delivery. We relax and begin our holiday. 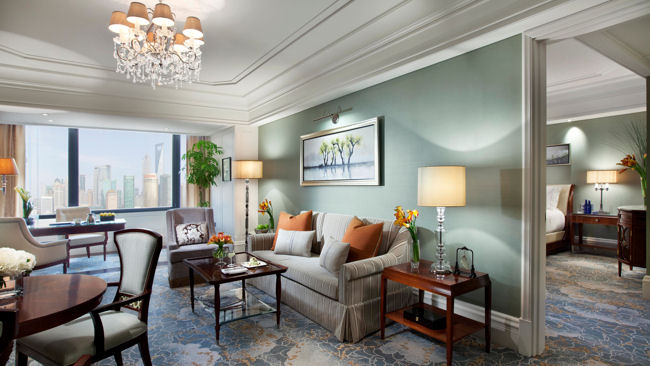 Check-in takes place in our Luxury River Suite. The décor is stunning, the technology out of the "Jetsons." In addition to flat panel televisions in both the bedroom and separate living area, there is a third viewing screen behind the bathroom mirror. With a touch of the remote, CNN and Wolf Blitzer appear on a 12 by 15 inch section of the mirror to update me on world affairs while I brush my teeth! The W.C. is yet another marvel of innovation. Suffice to say one quickly becomes accustomed to a heated seat.

We are shown how to use the in-room computer system, which comes with complimentary internet access, operates the drapes, and allows us to pre-set the room temperatures and lighting. Still, it is the view that captivates. The Huangpu River (tributary of the mighty Yangtze) has been the lifeblood of commerce since Shanghai was first established during the Ming dynasty. Today ships and barges of all sizes and descriptions navigate against a backdrop of futuristic skyscrapers. The panorama is breathtaking. 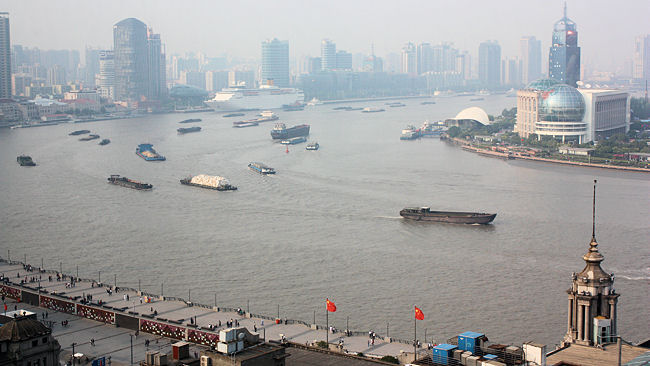 The next morning we are out the door at 5:30 am. (Jet lag makes for earlier risers!) The Waldorf is composed of a heritage building that was once the exclusive Shanghai Club and the new Astoria tower with its extraordinary views. The transition is seamless as we traverse from new to old. The inspiration for the modern was the classic design of one of Shanghai's most prestigious addresses: No. 2 on the Bund, now our home away from home.

The Bund (from the Hindi word for embankment and named by the Indian workers brought in to build the waterfront trading houses) has recently added a riverside promenade. At dawn it comes alive with joggers, strollers, and old men flying kites. There is the occasionally elderly Chinese walking backwards (intending to reverse the aging process?) but the overwhelming impression is of energy and modernity. 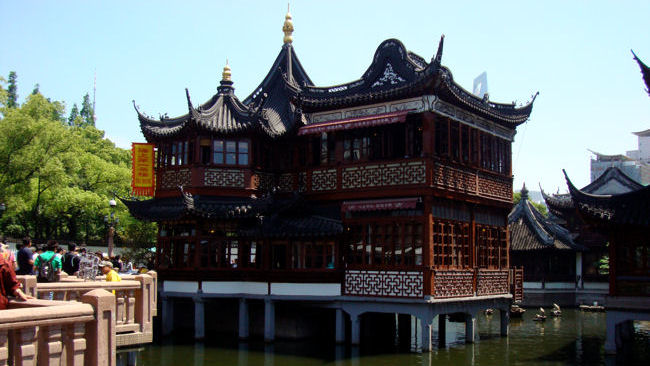 Many tourists begin with an orientation bus tour but we decide to set out on foot once we discover that street signs now use pinyin, the phonetic spelling of Chinese characters using the Roman alphabet. The concierge provides us with a city map and suggests we head to Nanshi (pinyin spelling of Chinese characters for Southern City but commonly referred to as Old Town). The Waldorf Astoria on the Bund is ideally situated for exploring. Within minutes we find narrow lanes, traditional architecture, and street markets that sell everything from silk pillows to Rolex watches (undoubtedly knock-offs).

At the center of Old Town is the Huxinting Tea House, set in and surrounded by a small lake. Originally a temple, later a brokerage house, today it is a perfect spot for a light lunch or break from sightseeing and shopping. I snap photos but we push on since we have reservations for afternoon tea back the Waldorf.

We return to the hotel hours later, weary but elated. People are friendly and helpful. Navigating is proving so much easier than expected. And Kenny, our miracle worker at the concierge desk, has tracked down our luggage and it awaits us in the room! 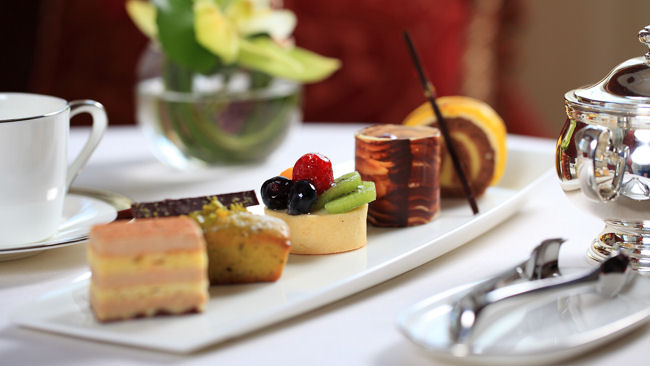 High Tea at the Waldorf Astoria (including hot appetizers, cold finger sandwiches and pastries) is served in the Salon de Ville. Once ex-pat Brits gathered here to read, smoke and hobnob. Now this former bastion of white male privilege is open to all with the resources to partake. I wonder how the Chinese feel about a custom so obviously linked to the era of Western imperialism, but the Shanghainese we meet are not looking back. They are proud of their city, proud of their country, and proud of their ability to host in style. Tea at the Waldorf and indeed the Shanghai Waldorf experience embodies not only the ideal meeting of East and West, but also the new confidence of China.

On day two of our visit, we plan to cross the river and check out the Pudong financial district, whose skyscrapers and neon lights announce 21st century China. Our guidebook suggests the pedestrian tunnel and an ascent to the top of the Oriental Pearl Tower for the view, but at breakfast, a Waldorf staff member describes an alternative. On her recommendation we first stroll Nanjing Road, the pedestrian-only shopping mecca, then cross People's Park and duck into the Art Deco Park Hotel, reputed to be Mao's favorite. On the second floor is a mini-museum with photos of famous guests. 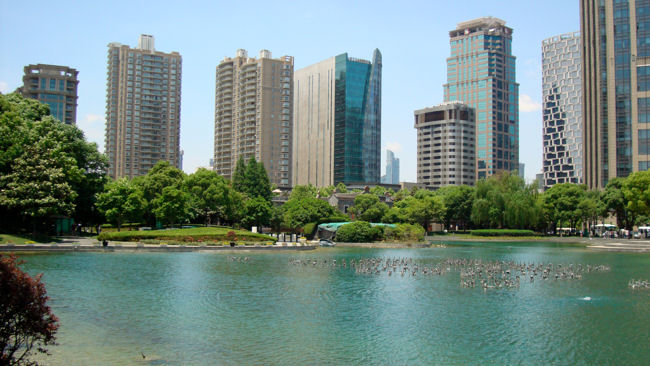 Next we take the ferry across the river and head to the Ritz Carlton in the International Finance Center. Its restaurant on the 52nd floor offers the same view as the Oriental Pearl without the crowds. Air-conditioned comfort and an ice-cold beer -- this is sightseeing at its most civilized.

Pelham's in the Waldorf Astoria is our destination for tonight's dinner but first we meet friends for drinks at the famous Long Bar. It was once a meeting place for foreign businessmen, at which time patrons were positioned according to rank. The most important (company heads called taipans) were given the seats closest to the Bund. Women and Chinese were refused entrance. The Long Bar was destroyed during the Cultural Revolution and only recently carefully reconstructed. The room's high ceiling and dark timber paneling recapture the affluence of a bygone era but welcome all. 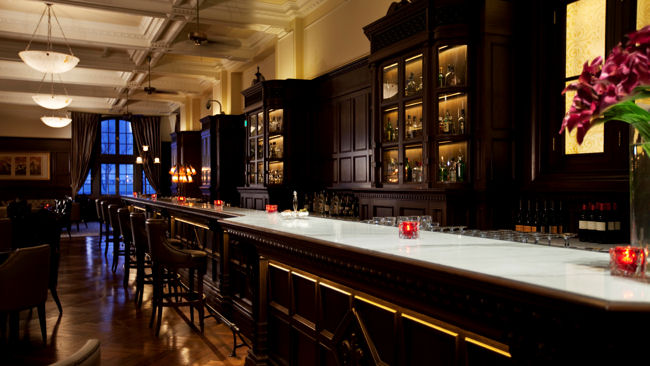 Although we have eaten primarily Chinese cuisine since our arrival, tonight we opt for New York style fine dining at Pelham's. The wine list is extensive and we decide to indulge with a dry white Sancerre. It's superb! The dining room is formal yet intimate (as promised), and tonight it is fully booked with Westerners who are clearly pleased to discover familiar menu items clear across the globe.

On our final day, we decide to visit the section of the city that was once the French Concession. At its core are the grounds of a former French estate transformed into high-end restaurants and shops. Known in Chinese as Xintiandi, its feel is distinctly Parisian. It was also the site of the first meeting of the Chinese Communist Party with a small but impressive museum. We continue past Fuxing Park to the former home of Sun Yat-Sen, now also a museum. 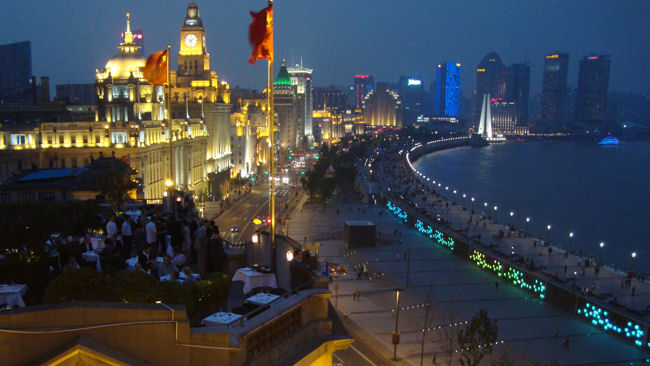 Shanghai view from New Horizons restaurant on the Bund

Just next door to the Waldorf Astoria at "Three on the Bund" are the two excellent dining options. With only one night left, we decide...on both! Drinks at Jean-Georges, where the ginger margaritas are renown, followed by a meal at the New Horizons located on the top floor of the building. We've reserved an outside table and no matter how fine the food (and it is excellent) nothing can rival the view. It is the perfect end for our too short stay in Shanghai.

On the way to the train station (next stop Hangzhou), I reflect back on my introduction to China. I expected a challenge, the need to adapt to an alien culture. Instead I find a modern world infused with the history of our planet's oldest continuous civilization. There is no doubt that the Waldorf staff eased the way. They "had my back" when I needed help and advice when I asked. Their property is part of Shanghai's story and a stay there brings history to life. 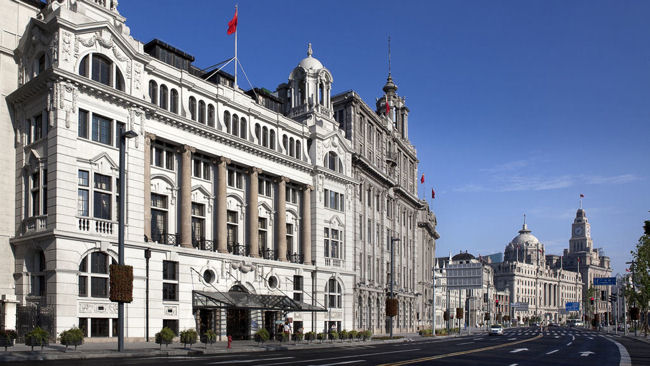 Waldorf Astoria Shanghai on the Bund

WHEN TO GO FOR LEISURE
High season is spring and fall (March through May and mid-Sept through November). Winter can be cool and rainy, summer hot and muggy.

BEFORE YOU GO
Visas are required for US citizens. Single entry visas are adequate unless you plan to visit Hong Kong mid-trip.

Shanghai is served by two international airports, Pudong Airport (PVG) and Hongqiao Airport (SHA). Most Western carriers fly into Pudong. Hongqiao is closer to the city and more convenient for domestic flights.

WHERE TO STAY
Waldorf Astoria on the Bund. This is "hands down" the luxury property of choice. The suites in the heritage building (Waldorf Astoria Club) offer 24-hour butler service (and the chance to live like a taipan).