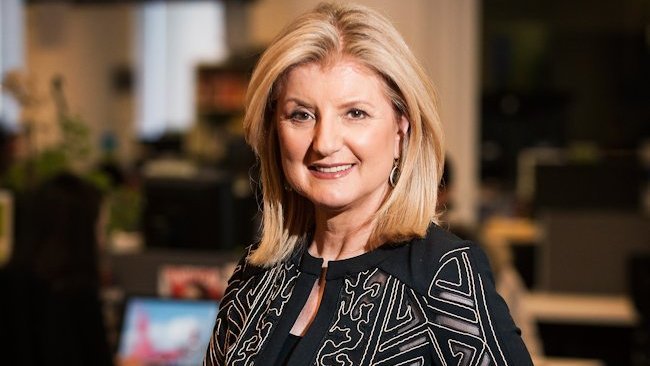 On the heels of the recent launch of its global Westin Well-being Movement, Westin Hotels & Resorts is proud to announce the addition of Arianna Huffington to the Movement's Well-being Council. The Well-being Movement is an ambitious $15 million campaign designed to enhance the well-being of guests and associates around the world, and Huffington's role on the Council will be to serve as the expert on all things pertaining to the hotel brand's Work Well pillar. Huffington joins fellow Council member Andy Puddicombe, Headspace co-founder and meditation expert, who was appointed ambassador of the Feel Well pillar as part of the campaign's launch last month. As the Westin Well-being Movement progresses, Huffington and Puddicombe will be joined by other Council members, each of whom aligns with one of Westin's six wellness brand pillars: Sleep Well, Eat Well, Move Well, Feel Well, Work Well and Play Well.

In her new role as the Work Well ambassador on the Westin Well-being Council, Huffington will contribute content to www.Westin.com/wellbeing and the brand's social channels aimed at helping guests and associates around the world achieve their definition of well-being as it relates to their professional careers. Her contributions will be complementary to her new book, “Thrive: The Third Metric to Redefining Success and Creating a Life of Well-Being, Wisdom, and Wonder.”

“I'm delighted to be joining Westin's Well-being Council,” said Huffington. “When we include well-being in our definition of success, we see the benefits in every aspect of our lives. Westin's advocacy of holistic well-being taps into a real longing in people to live their lives with less burnout and more aliveness. So together we'll be helping Westin associates and guests around the world take steps to practice well-being in their professional lives, by moving from knowing what to do to actually doing it.”

As one of the most recognizable names in media and journalism, Huffington has successfully established herself as an authority on what it means to Work Well. In addition to serving as the chair, president, and editor-in-chief of The Huffington Post Media Group, Huffington is a nationally-syndicated columnist, the author of 14 books, and a Pulitzer Prize winner for her national reporting.

After collapsing from exhaustion in 2007, Huffington embarked on a journey to re-define success and chronicled her experiences in her new book. The book discusses four dimensions: well-being and health, connecting with our capacity for wisdom, wonder and giving. Through her journey, Huffington found these four dimensions, when paired together, create the critical Third Metric, a way to measure success beyond just money and power.
Huffington, as well as the other Council members, will also be featured on the brand's new well-being digital portal that will serve as a catalyst for a global exchange of new ideas and interpretations of well-being, as well as bring the Movement's initiatives to life.

The Westin Well-being Movement launched globally on March 20, 2014 with the announcement of Westin's partnership with Headspace, a leading force in the field of health and well-being, and Puddicombe's appointment as the first Council member. Puddicombe, Huffington and additional Council members who will be joining throughout the year will be the cornerstone to the Movement, guiding and inspiring new initiatives while leveraging proprietary research to inform and introduce new programs.

“We are thrilled to have Arianna as the newest addition to the Westin Well-being Council,” said Brian Povinelli, Global Brand Leader for Westin Hotels & Resorts. “Westin as a brand has re-shaped the hospitality experience with our guests and associates well-being in mind. The way Arianna is helping to re-define what success in today's world means is well aligned with our values and Work Well pillar.”