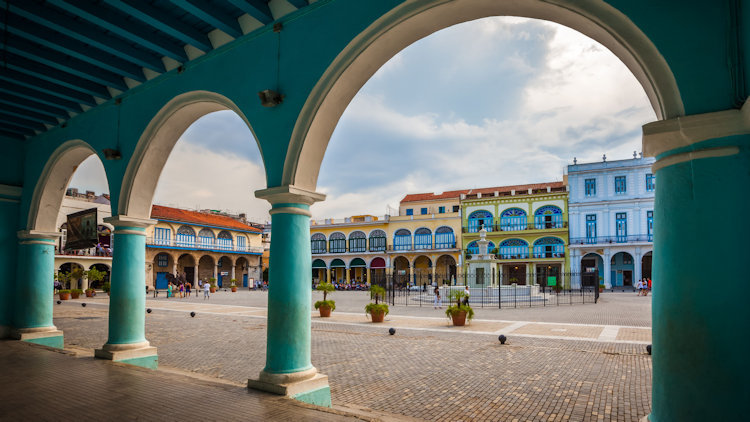 UNESCO announced that the area of Paraty and Ilha Grande, Brazil, has been added to the list of World Heritage sites on accounts of the region’s impressive biodiverse landscape and deep-rooted cultural characteristics. The area located between the Serra da Bocaina mountain range and Atlantic Ocean is home to Paraty, one of Brazil’s best preserved cultural towns, as well as four protected natural areas of the Brazilian Atlantic Forest, one of the world’s key biodiversity hotspots. Visitors to the area are met with white sand beaches, an array of small islands and lush rain forest. Locals hope that the inclusion on UNESCO’s list of World Heritage Site will bring much deserved recognition and more stringent measures to protect it. www.visitbrasil.com

The area near the city’s former zoo is emerging as the new cool place in town to shop, eat out and people watch. Aptly known as Palermo Zoo, many young porteño designers are setting up shop and creating a street scene of their own. As well as fashion, this flourishing new area has some great concept stores, all meticulously designed and stocked with care. Visitors can head to cool and trendy bars on Boulevard Cerviño to indulge in Buenos Aires’ thriving beer scene. https://turismo.buenosaires.gob.ar/en/article/shopping-circuit-palermo-zoo

Journey Latin America has become the first UK tour operator to start offering Tierradentro following a change in the Foreign & Commonwealth Office’s travel advice to Colombia’s Córdoba region. The site contains a series of underground tombs featuring human figures dating back to between the 6th and 10th century. Following the announcement, Journey Latin America introduced the location to its 13-day ‘Off the beaten track Colombia: San Agustín and the Amazon’ tour giving travellers the chance to be amongst the first to rediscover Tierradentro. The tour is priced from £2,911 per person and includes transfers, domestic flights, accommodation and excursions. www.journeylatinamerica.co.uk/destinations/colombia/holidays/off-the-beaten-track-colombia-san-agustin-and-the-amazon

In December 2020, Chile’s beautiful Lake District will be in the path of a total solar eclipse and with some of the clearest skies in the world thanks to the low population density, it is guaranteed to be an extraordinary spectacle. Pura Aventura is offering an independent self-drive trip focusing on the land of volcanoes, monkey puzzle forests, vineyards and clear blue lakes while travellers can marvel in one of nature’s greatest spectacles. The 11-night ‘Chile Eclipse Explorer 2020’ tour priced from £4,985 per person, including accommodation on a bed and breakfast basis, internal flights, private transfers, 4x4 car hire and some excursions. Departs on 7 December 2020. www.pura-aventura.com

Latin America specialists, Tucan Travel, has launched a new group tour combining the highlights of Cuba with two Central American destinations; Belize and Guatemala. The itinerary begins in Cuba visiting tobacco farms, taking salsa lessons and enjoying vibrant Havana before heading to Caye Caulker in Belize for some rest and relaxation. The tour finishes up in Guatemala exploring the mysterious Maya ruins of Tikal before heading to Antigua to marvel at the volcanoes surrounding the city. The 15 day ‘Cuba & Central America’ tour is priced from £1,494 per person and includes internal transport, accommodation, and some meals and accommodation. www.tucantravel.com/tour/cuba-and-central-america/cha

It has been 15 years since founders Greg Carter and Chad Carey started Chimu Adventures and to mark the occasion the tour operator has created a birthday homepage full of their favourite South American and Polar trips. These tours come with exclusive ‘Birthday Celebration’ offers including price discounts or bonus nights as well as a recommendation from Chimu staff on why these are their favourite trips. The page is complete with a special video detailing what has inspired Chimu over its 15 year journey. An example tour is the 11-night ‘Wonders of Chile & The Fjords’ priced from £6,383 including accommodation on an all-inclusive basis, excursions and return international flights. www.chimuadventures.com/en-au/birthday

Guests can now enjoy a new luxury experience at the Country Club Lima Hotel, inspired by the most renowned vintage French champagne, Dom Pérignon. The new Dom Pérignon Suite was created in collaboration with the luxury brand and those staying in it can expect VIP services such as luxury airport transfer, private in-room check-in and check-out experience, welcome caviar upon arrival and one bottle of Dom Pérignon 2009 every night during the stay. A one-night stay is priced at £2,000 per night including complimentary VIP service and access to the private wine cellar. www.countryclublimahotel.com

Sol y Luna is a hotel that opened in Peru's Sacred Valley with the purpose of funding a school for some of Peru's most disadvantaged children by donating a proportion of their income from hotel bookings. Ten years on and the Sol y Luna foundation has opened the doors to the Sol y Luna Home, a shelter for the children of the Sol y Luna School who have been abandoned or were victims of violence and abuse. The foundation has worked immensely hard over the past ten years to continually create safe and loving environments which provide lodging, food, clothing, and help each child develop physically, mentally, emotionally and morally. A one-night stay in Hotel Sol y Luna is priced from £318 per person with proceeds going to the Sol y Luna Foundation. www.hotelsolyluna.com

The Chilean boutique hotel, Awasi Atacama, has recently undergone a full refurbishment and now boasts an entirely new layout. The hotel was previously spread across two sides of the road, however now with the help of a talented architect and skilled constructors, the plot of land has been expanded and relocated to the same side of the road. There is a new reception area and new suites now totalling 12 rooms on-site (each with its own private guide and 4WD). A two-night stay is priced from £435 per person on an all-inclusive basis with excursions and transfers included. www.awasiatacama.com

Peru’s Inkaterra Reserva Amazonica has revealed a newly renovated spa that maximises the vast and dramatic natural setting of the luxury property. Set on the riverbank in the heart of the Peruvian Amazon Rainforest, the spa allows travellers to immerse themselves in nature. The ENA spa uses 100% naturally-derived and locally-sourced products and the open-sided nature of the cabaña means that guests are completely immersed in the striking Amazonian surroundings. Treatment beds offer unparalleled views of the Amazonian sunsets and the spa soundtrack is provided by the Amazon’s diverse wildlife. A two-night stay is priced from £539 per person on an all-inclusive basis with transfers by land and river and excursions. www.inkaterra.com/inkaterra/inkaterra-reserva-amazonica/cabanas

Relais & Chateaux property, Hotel B, has launched a new tour to teach guests about the most important Peruvian contemporary artists through the on-site collection. For art lovers who want to see more beyond pre-Hispanic art exhibited in the museums of Lima, Hotel B provides an alternative boasting an impressive collection for guests to enjoy. The tour is held by an art specialist who brings the most iconic works of the collection to life. The tour also includes a glass of cava or pisco sour on the rooftop and an art work jigsaw puzzle of one of the pieces from the collection. A one-night stay is priced from £352 per person, on a bed and breakfast basis. www.hotelb.pe

Ecoventura, a boutique luxury cruise specialist in the Galapagos, has launched a new yacht called The Theory. The inaugural voyage took place earlier this year and the vessel has already been accepted within the Relais & Chateaux collection. The ship has been custom-designed for comfort and the state-of-the-art design allows for minimal environmental impact as well as less travel time between islands, meaning guests have more time for exploration. The 13-member Ecuadorian crew includes a full-time concierge, and two expert naturalist guides – one for every 10 pax. Prices are available on request. www.ecoventura.com

Delfin Amazon Cruises gives back to communities through NGO programme

Delfin Amazon Cruises offers a series of programmes via its NGO the Kuyapa Foundation which gives passengers the opportunity to give back to the communities that host them. One such scheme is the painting programme which will next take place in December and will involve the Delfin team and guests who wish to participate, painting homes in the port town of Nauta where the cruises depart from. Schemes such as this have helped provide health care to remote communities, supply them with crafts equipment and build local markets to sell artisan crafts which has become a main source of income for these communities. An all-inclusive three-night programme is priced from £1,973 per person. www.delfinamazoncruises.com

Silver Origin prepares for its inaugural voyage in July 2020

This year marks the tenth anniversary of British Airways’ inaugural London Gatwick – Punta Cana flight and so to celebrate, the airline will be increasing the service to a four times weekly flight as of 21 December 2019. The new flight will be operated on Tuesdays, Thursdays, Saturdays and Sundays during the winter season with the last flight taking place on 28 March 2020. A return flight is priced from £659 in economy class. www.britishairways.com

Air Europa has announced that flying to Mexico City from Barcelona is now possible with an extended codeshare agreement the airline holds with Aeromexico. Passengers can now fly from El Prat Airport on a three times weekly flight to Mexico City. The extension of this agreement also includes domestic flights in the country meaning Air Europa now serves Oaxaca, Mérida, Querétaro, Guanajuato as well as Veracruz, Cancun, Guadalajara, Monterrey, Aguascalientes, San José del Cabo and Puerto Vallarta to which the airline already travelled. A return flight to Mexico City is priced from £1,000 in economy class. www.aireuropa.com

The Argentina Tourism Board has released a promotional video to showcase the Puna de Atacama region, one of the prime locations on earth to closely resemble Mars. The video comes in light of the recent 50th anniversary of the Moon Landing and hopes to capture travellers who’s travel plans have been cast further afield than the terrestrial.  Due to the climate, the soil and the geography of northern Argentina and by means of a digital activation prepared by the local Tourism Department, the dream of travelling to space is possible and Argentina welcomes travellers to experience and explore this natural lab. Steppes Travel offers a ‘Private Guided 4x4 holiday in North-West Argentina priced from £3,595 per person and includes accommodation, internal transport, accommodation and excursions. www.steppestravel.com/argentina-the-puna-experience-by-4x4 Video available here: https://youtu.be/qWwb-nVI5n8

Futuropa, a non-profit association of tourism professionals dedicated to promoting Costa Rica, has joined LATA. Founded 20 years ago, Futuropa contains members such as inbound tour operators, hotels, car-hire companies and more, all dedicated to promoting the Central American nation in European markets. Futuropa relishes the chance to be part of an ever-growing travel community with unrivalled passion for the destination it seeks to serve. Both LATA and Futuropa look forward to working closely to stimulate growth in Costa Rica’s tourism sector. https://travelcostarica.cr