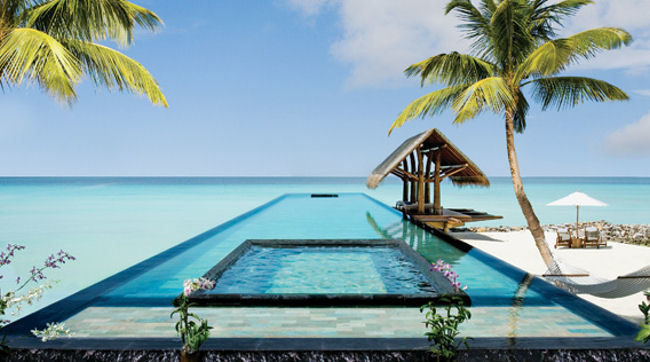 The A-list know a thing or two about luxury hotels and nothing but the best will do for their Big Day. Romantic celebrity hotels follow a tried-and-tested formula; take one sugar-white beach overlooking rippled azure waters, add a sprinkling of coconut palms and some sybaritic suites, then round it all off with the best service known to mankind, courtesy of a personal butler.

So if you want to push the boat out star-style this Valentine's Day, look no further. Here Travel Intelligence selects six of the most stunning romantic retreats of the stars...

Celeb couples: Ben Affleck and Jennifer Garner; Eva Longoria and Tony Parker. What happened? Ben and Jen got married on the private beach while Eva and Tony took their honeymoon in one of the resort's luxury beach-houses.

Parrot Cay is a celebrity favourite for good reason. With the formidable Christina Ong (head of the COMO empire) at its helm, this 1000-acre tropical island ticks all the A-lister boxes: complete privacy, an award-winning spa and picture-perfect, marine life-rich waters.

Celeb couple: Ryan Phillippe and Reece Witherspoon. What happened? On a break away at this stately luxury hotel, Ryan popped the question over a romantic breakfast-in-bed of waffles with strawberries and cream.

Planter's Inn, all regal Baker furnishings and impeccable staff, suited the couple perfectly; theirs was a classy affair from the start, with Ryan proposing to Reece with a rare 1990s Neil Lane, four-carat Asscher-cut-diamond platinum ring.

Celeb couple: Gwyneth Paltrow and Chris Martin. What happened? The couple flew by private helicopter to honeymoon at this luxurious Mexican resort; the name means 'windows of paradise' due to the magnificent sky-sea views.

Its stellar guest list gives a good indication of just how special Las Ventanas is. Staff move around the resort via tunnels to give lounging celebs absolute privacy, whale-sightings in the Sea of Cortez are announced by conch shell and there's even a 'Director of Romance' on the team.

One and Only Reethi Rah - Maldives

Celeb couple: Fergie (Black Eyed Peas) and actor Josh Duhamel. What happened? The couple honeymooned in a private GBP10,000-a week villa, with their own butler to serve meals. Fergie got massages at the spa and the couple both took to the ocean for a spot of canoeing.

There's no better way to describe One and Only Reethi Rah than paradise personified. It is truly unique, from the pristine sweeps of beach, jungle-flanked pool villas (the perfect camouflage against prying paparazzi) and - as Fergie discovered - the most amazing massages in the Maldives.

Celeb couple: Courteney Cox and David Arquette. What happened? Courteney and David honeymooned at this secluded Caribbean resort, which has a private beach and villa with wrap-around infinity pool.

The Arquettes knew they were onto a good thing when they hit upon La Samanna for their honeymoon. With private beachside cabanas stuffed to the rafters with flat-screens, iPods, nine-foot long beds and of course those uninterrupted ocean views, guests need never leave.

Celeb couple: Tiger Woods and Elin Nordegren. What happened? Tiger hired out the resort exclusively for a week for their $2 million wedding and honeymoon. They married at sunset on a pagoda at the golf club's 19th hole.

If there's one place that can exceed billionaires' expectations (and their pals, Bill Gates and Oprah Winfrey, were guests), it's Sandy Lane. The queen of luxury resorts runs like a well-oiled machine, and everything from its top-notch spa to gourmet restaurants hit the gold standard.