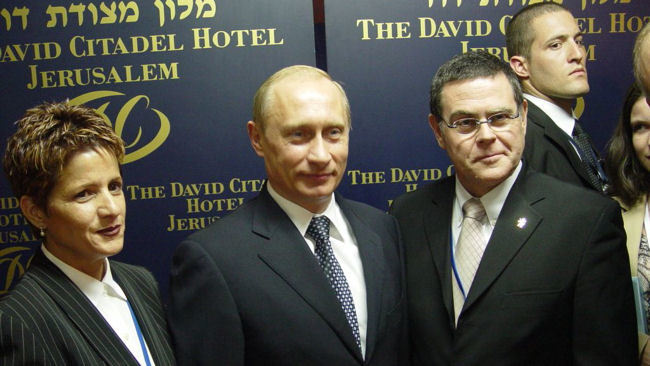 Imagine hosting top dignitaries such as Russia's President Vladimir Putin, U.S. Secretary of State Condoleezza Rice, Israeli Prime Minister Ariel Sharon and more – as part of your job! Hotel executive Stephen W. Ayers, who has been privileged to do just that, tells us about some amusing anecdotes from his long list of unusual experiences as general manager of the famous David Citadel Hotel in Jerusalem.

For hotel managers, the days are busy and generally fly by with nary a nod. Yet occasionally the regular routine may give way to the extraordinary! During my time as general manager of the David Citadel Hotel in Jerusalem, I was fortunate enough to experience the extraordinary when welcoming several dignitaries and high-level diplomats to the hotel.

While the prime minister of Israel, the president of Israel, members of the Knesset and numerous celebrities and public figures were almost daily visitors, none of the visits stand out in my memory more than those of Secretary of State Condoleezza Rice on multiple occasions, and the State visit by President Vladimir Putin of Russia.

When contemplating the arrival of Secretary Rice, I was determined to make her stay memorable in a way that she would remember the David Citadel as ‘different' from all the other hotels she was accustomed to staying at in the Middle East.

I remembered that she was quoted as having said that if she had not been appointed Secretary of State, she would like to have been the AFL commissioner!

As it happened, the Super Bowl took place while she was at the hotel, but due to the time difference it was broadcast in the middle of the night. I arranged to have it recorded, and as she was departing the hotel I presented it to her as ‘the in-flight sports entertainment' for her trip back to Washington. I remember that the Patriots were playing and won, and I seem to recall she is a Patriot fan.

She wrote me a letter on February 16, 2005 thanking me for taping the Super Bowl and for making her stay enjoyable. You can imagine my panic when she next visited my hotel. The NFL season was over and I had no idea how I would make this visit stand out -- until I had a great idea. The Secretary may be a fan of the AFL, but I am a diehard fan of Liverpool Football (soccer to you North Americans!) Club. I still have friends living in the Liverpool area from my school days in England.

My team had just won the Champions league against Milan in Turkey on a penalty shootout, after trailing by three goals. It was a superbly entertaining match, full of action. I had a recording of the game, and decided it was time to convert the Secretary to a Liverpool supporter.

Again, as she took her leave of the hotel, I presented her the ‘footy' tape for her in-flight sport entertainment with the wish that she would be a convert to the fair game of soccer.

Needless to say, that July I received another wonderful letter from Ms. Rice, thanking me again for the soccer tape, and also for the comfortable stay at my hotel.

On her final visit to the David Citadel during my tenure as general manager, I again waited to say goodbye in the indoor parking lot. As I shook her hand, I asked if she was now a Liverpool fan. She did a small dance and stated, “Liverpool fan! Why not, yes. Liverpool, the Beatles and all that!” Then she got into her Suburban and was whisked off to Ben Gurion airport. I am sure that those tapes made the difference in her memory of which hotel stood out in her world travels.

I also had the honor to welcome President Putin and shake his hand, but his visit stands out in my mind more for the story of his bulletproof Mercedes limousine.

It was flown in from Russia especially for the visit and guarded night and day in the hotel underground parking lot. I took aside one of the English-speaking Russians in his mission and requested that he show me the limo. It was a great experience! The windows were made of two-inch thick glass, the tires were of solid rubber to prevent blowouts and the body was bulletproof. I was also amazed at how much communication equipment was in that limo -- like a travelling Kremlin!

In any case, I said to the English-speaking Russian about the driver, a rather gruff-looking fellow, “Tell him that I know that these Mercedes cars are very unreliable vehicles, prone to breaking down, and that should he need it, my Peugeot 407 would be at the service of the President!”

The driver took a long look at me, then at his fellow Russian, and thinking that I was serious, answered in Russian, “Tell this man that one of the tires on my Mercedes is worth more than his whole car.” I burst out laughing.

Another day in the life of a hotel manager!