The Perfect Week In Vienna, Europe’s Most Relaxed Capital 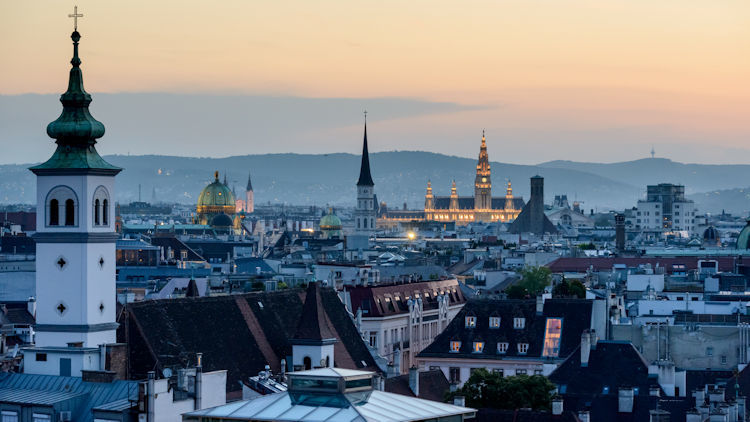 With the weather warming up and spring travel season rapidly approaching, now is the perfect time for a trip abroad that offers al fresco dining, cultural attractions, and plenty of options for outdoor exploration. Those in search of a laid back vacation with upscale charm, Vienna, the crown jewel of the Hapsburg Empire and long considered the "intellectual capital of Europe," is a walkable gem with cultural attractions that appeal to every type of traveler.

In recent years, this stunning city on the Danube has gained global attention for its 21st-century design sensibilities, bike culture, and cutting-edge culinary scene--earning it the title of most liveable capital in the world by The Economist Intelligence Unit. Vienna, in addition to hosting a range of fascinating openings and events to celebrate 2020, also offers an easy gateway to the best of Central Europe, with plenty of day trip options to get out into the bucolic Austrian countryside.

Whether you're planning a once-in-a-lifetime trip or taking advantage of the many cruise options that dock in Vienna, here is a guide to the perfect week in this charming city on the water.

Fly in on Saturday to allow time to rest and recoup. For an elevated experience with historical significance, stay at the Sacher Wien, one of the oldest and most decadent hotels in the city as well as the birthplace of the world-famous Sacher torte. The hotel is within short walking distance of some of the city's most iconic sights, including the Albertina Museum, the Burggarten, Wiener Stadtpark, and the Vienna State Opera, so after you've rested and unpacked take in a few of the sites before retiring for an evening cocktail at the hotel's Blaue Bar or Salon Sacher.

Wake up early and visit one of Vienna's traditional markets, including the Naschmarkt, where you can pick up everything from wiener schnitzel to freshly imported spices from the Middle East. The city, more than half of it made up of green space, and boasting over 280 imperial parks, was meant for lounging and long walks. Experience one of Vienna's many lush gardens, including the Volksgarden, which boasts over 400 species of rose blooms. If you'd like to see the city at a brisker pace, rent a bicycle and discover destinations like Vienna Woods, Lobau, and Prater Park or book a tour with Alexa Brauner for a full itinerary. If you're an advanced peddler, make your way up to Cobenzl for stunning sunset views. Afterward, stop off for dinner at Das Loft, the glittering new restaurant on the 18th floor of the Jean Nouvel Tower on the Danube Canal, which offers international cuisine with a breathtaking view of the city.

While many museums and galleries are closed on Mondays, there are still plenty of attractions to help start the week. Nature lovers can visit the recently opened Haus des Meeres, a vast public aquarium in Vienna located in Esterhazy Park in downtown Mariahilf district, one block south of the bustling Mariahilfer Straße. Then, visit The Leopold Museum, home to one of the world's largest collections of modern Austrian art, and featuring homegrown innovators such as Egon Schiele, Gustav Klimt, and Richard Gerstl. If you are arriving in late spring, be sure to catch the launch of Leopold Museum's "MQ Libelle", which promises to be one of the chicest rooftop bars and eateries in the city.

Take advantage of the midweek slowdown to visit Schonbrunn Palace, the primary summer residence of the Habsburgs, and one of the most popular tourist destinations in Vienna. Afterward, stop for lunch at the Schoene Perle for traditional Viennese fare in a light, accessible setting, or take the afternoon to explore the spectacular grounds of the Palace. At night, try to catch a bit of live music, whether it's opera, jazz, or classical. The city is currently gearing up for Vienna 2020 City of Music in celebration of the 250th anniversary of Beethoven's birthday and will be offering a range of performances at museums, galleries, concert halls, and indoor and outdoor stages.

Spend the morning walking the Judenplatz, the traditional Jewish quarter of Vienna, which today is a thriving cultural center and boasts a world-famous memorial by artist Rachel Whiteread. Start with a trip to the Jewish Museum Vienna, to learn more about Vienna's rich artistic history, stopping in for coffee and lunch at Café Eskeles before visiting the gift shop, which contains a selection of independent designers from Israel and beyond. Afterward, duck into the Sigmund Freud Museum, the legendary psychotherapist's former home and office, which will reopen this May after a major renovation. The space will now boast Europe's most extensive psychoanalysis library as well as a world-class contemporary art center. At night, treat yourself to a light dinner and exquisite design on the water at Motto am Fluss.

Thursday is about art and design, so arrive early at the Albertina Modern, one of the city's most famous museums. Stop for lunch at Café Landtmann, Freud's favorite cafe, before setting out towards Kunsthalle Wein, the perfect space to check out new and up-and-coming designers. For the best of the avant-garde, visit the Secession Building, an "architectural manifesto" of the Vienna Secession movement, or make your way to the Museumsquartier, a 60,000 m² area housing much of the city's most innovative museums. Visit the Architecture Center Vienna, dedicated to cataloging and displaying Austrian Architecture of the Twentieth Century, or the impressive Museum of Modern Art which contains a vast collection of 20th and 21st artists, including works by Claes Oldenburg, Yoko Ono, and Gerhard Richter. Afterward, stop at the Design Forum Wien, which acts as an interactive center for design “dialogue across mediums”, before visiting Q21, which is home to over 50 culturally-active projects, associations, agencies, editorial offices.

Make the most of your last full day in the city with some high-quality design shopping. Start with a decadent breakfast at Das Möbel, a Viennese café, furniture, and design shop. After, visit Bel Etage, which contains an impressive collection of Jugendstil antiques collected from Vienna's small shops and markets. Next, stop by Lobmeyr, a stunning glassmaker and shop within a historic three-floor 19th-century interior. One of Vienna's leading glass manufacturers, Lobmeyr was once the exclusive glass supplier to the royal court, and today offers singular glassware and accessories. For modern touches, visit the Michael Wahlraff redesigned MAK Museum and Design shop, located within Vienna's legendary Museum for Applied Arts, for one-of-a-kind collaborations.

Celebrate with an elaborate meal at one of the city's 15 Michelin starred restaurants. Dine within the romantic vaulted wine cellars of Spanish Chef Juan Amador's Restaurant Amador, or stop for experimental Viennese food at Mraz und Sohn.

For your last morning, visit Palmenhaus on the Burggarten, and adjacent to Hofburg Imperial Palace. A magnificent glasshouse that was once the former summer greenhouse of the royal family, today it offers a superior brunch menu while allowing for one last chance to breathe in the luxuriousness of the city before flying out.