Tsurutokame - A Tokyo Restaurant Run by All Female Chefs 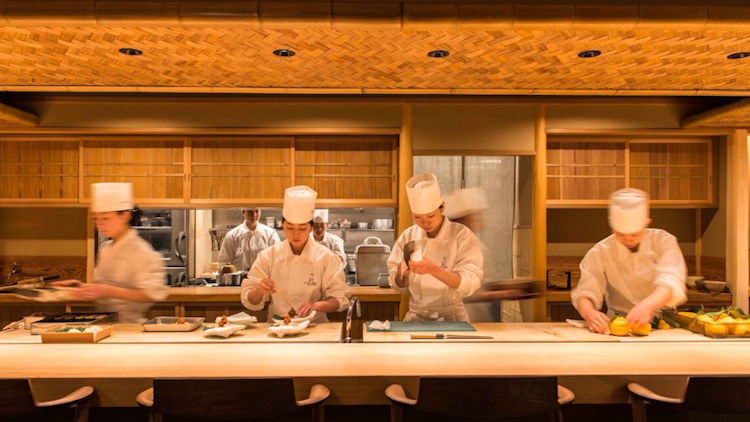 Hidden in the Ginza neighborhood of Tokyo, Tsurutokame might seem like another unassuming kaiseki restaurant, but this little gem is unlike any others in the area in that it is entirely run by female chefs. In Japan, where it is rare to find women operating behind the counter and especially unlikely to see a woman in a leading culinary role, Tsurutokame is truly more than just another restaurant...

Osamu Mikuni, 65, who owns eight booming restaurants throughout the region, founded Tsurutokame and hopes it to be his legacy by striving to provide a level of training and opportunity that women  cannot find anywhere else in Japan. In addition to receiving expert culinary training, Mikuni’s goal is to enrich the lives of his chefs, offering unique opportunities to help them grow spiritually and with confidence from within their heart and soul.

Why was opening Tsurutokame important to Mikuni when he had already built a restaurant empire in Japan? There was something keeping him up at night. More and more often, he was encountering female chefs  who produced superior cuisine to that of their male counterparts, yet were receiving none of the credit. It upset him that these talented women were overlooked and denied the roles they deserved purely due to their gender. So, after many decades as a restaurateur  and chef, Mikuni used his resources to create an environment where women could thrive, and the public could witness their talent firsthand.

All women who work at Tsurutokame, as young as 18, live together in a dorm provided by Mikuni, where they grow in an apprentice-style environment learning everything from graces and cultural rites to traditional lessons in calligraphy and tea ceremonies. They work as teams, learning time management and organizational skills, taking ownership of their work and holding one another accountable to ensure the restaurant upholds its already stellar reputation.

In a society where it is uncommon to see females in a starring culinary role, a restaurant operated entirely by women is unheard of. Guests are often shocked when they walk in and see the young female chefs behind the counter, but they always come back. The food, service and breathtaking presentation delivered by Tsurutokame rivals that of many notable restaurants in Japan, all of which are led by male chefs.

Ultimately, Mikuni hopes that the equal opportunity he is providing to aspiring female chefs will shine a light on the disparity in the industry and inspire change. While it’s Mikuni’s goal to encourage  women to pursue their dreams and truly understand their value, it is their passion and spirit that motivates him daily.